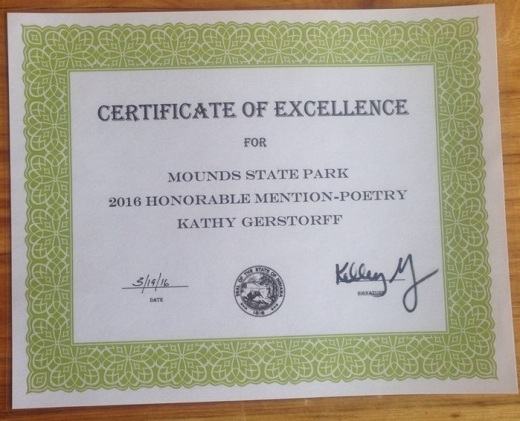 “There is no dishonor in honorable mention.” ~ Mike Rothman

“If she can’t win, she doesn’t want to play.” My cousin said those words about me when I was ten years old or so and a group of us kids were playing red rover or some similar game that I decided I didn’t want to play for reasons I don’t even remember. My cousin continued his berating, “It has to be her way or not at all.” He was talking to them about me right in front of me. I was furious, stomped back into the house and slammed the screen door to make the point that I was mad which probably just confirmed his point to the group. My cousin’s biting words stayed with me all these years. I think about it from time to time. Am I really that rigid that I don’t want to play if I can’t win? There have been many times in my life when I felt like that was true. I have never been into sports perhaps because I know I can’t win without training and I have no desire to train for any athletic event, not even hippity-hop when I was in the fourth grade. I was always last to get picked for the team and I really didn’t care. I would rather be sitting by myself somewhere coloring or reading a book.

Writing is a different story, sort of. I want to the be the best, do my best, but often feel like I fall short which used to prevent me from entering writing contests or attending big writer conventions where MFAs and bestselling authors abound. I remember the first time I attended the Midwest Writers Conference. I felt so inferior after coming home from that event. It took me months to get beyond my self-imposed limitations of thinking what makes me believe I have a chance of getting published when there are so many great writers who are struggling. Thank goodness self-publishing became popular and easily accessible or I would have probably never pursued publishing my writing.

Once I self-published, it was like breaking through an invisible barrier. Suddenly, I could say I was a published author. I began to see myself as a writer. I continued to study, read and write, becoming a little more confident with each poem and story I wrote. I began to enter writing contests, only a few that meant something to me. I remember the first time I won a writing contest, it felt like I won an Olympic gold metal. All I won was some random poster from the 70’s that became ashes along with all my journals, poems, stories and books when my house burned down a couple years ago.

After the fire, I got a new perspective about what is really important in life. I no longer wish to accumulate things. I would rather accumulate memories. I no longer write to “win” a contest or get published. I write to say what I feel I have to release into the world. If it resonates with someone, that is wonderful. I love when that happens both as a writer and a reader. But, I’m no longer in competition for the coveted “best-seller” title or winning any awards. I write because it is who I am and what I have to do to quiet the voices in my head. I write because I love the written word. Passionately.

When I got an honorable mention at the recent Mounds State Park Poetry contest, I felt that twinge of “first place” memory and smiled inside because I am in the game now, playing, having fun, right along with all the other writers who submit their art for something that is important to them.

Being willing to step outside your comfort zone and writing from your heart, that’s what makes you a winner!